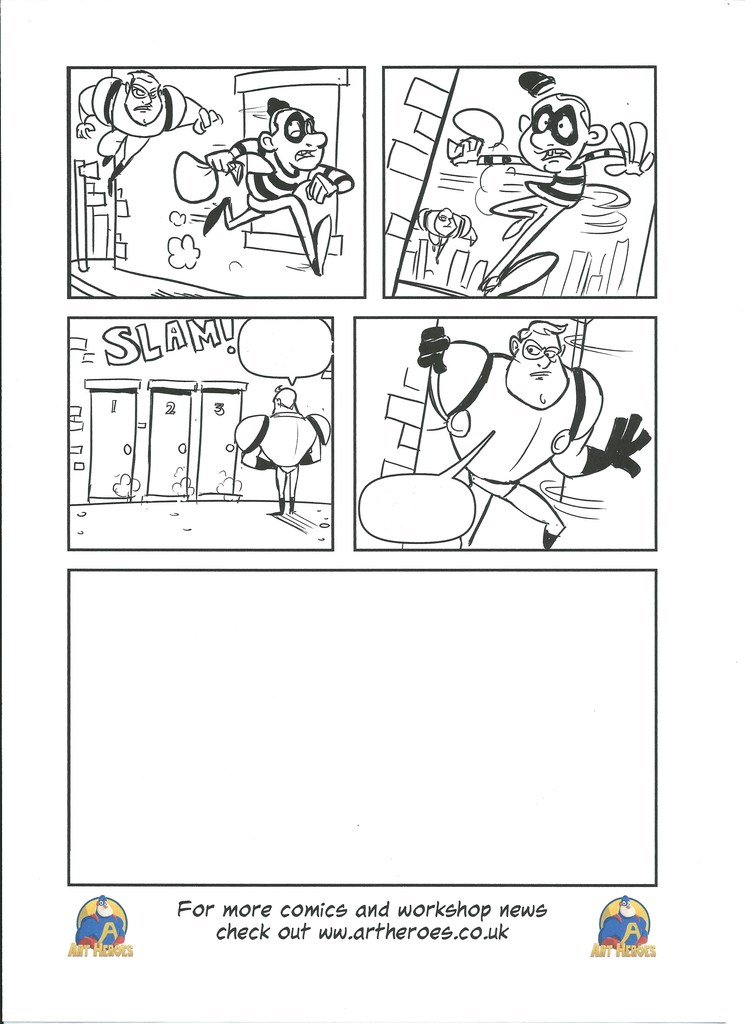 In the distance alarm bells were screaming. His heart was pounding endlessly - but that could be because he hasn't done this in years. Sweat was rushing down his face as the heavy bag of gold was weighing him down. He paused wheezing and spluttering for breath. A grimace spread across his face as he recalled his first robbery 13 years ago. Breathlessly he muttered, "Goodness this was so much easier back when I was fit!"

Suddenly, he turned to see a familiar figure flying down the road towards him. Instantly the panic flooded back through his veins. A booming voice bellowed, "Robbie Stripes!! Why...are...you...doing...this...to..." Incrediman was too out of breath to finish his sentence. Why had Robbie impulsively decided to show his face again after all these years? Incrediman thought he was through with this career choice.

Sprinting as quickly as an unfit man could Robbie Stripes made a dash for his life. The last thing he wanted was to end up as Incrediman's captive. That would just be humiliating! He had evaded him for this long. Today was not going to be the day.

He darted to and fro, in and out of the back alleys with Incrediman hot on his heels. Skidding to a halt, Robbie found himself in a stick situation. Three identical doors with no turning back. Incrediman was not far away. Capture was not an option. No time for indecision, any door is going to have to work. He closed his eyes. A door slammed. Incrediman arrived. All was obscured from sight as puffs of smoke lingered in front of the doors. "Which door...?"

“Oh no!” said the superhero, as the robber leaped around the corner, “He’s stolen all the money from the Bank of England… Get him!”  The robber sprinted through a door, the superhero stood there puzzled. Which door had he gone into? The superhero tried every door that was open. There was one door left, but it was locked and the key was nowhere to be found. The superhero said to himself, “I don’t have time to knock down the door or look for the key. What shall I do?”

Over his shoulder he saw the robber running outside the window, but it actually wasn’t a window, it was a mirror. He turned and looked behind him; the robber had escaped and locked him inside the building. Luckily, the super hero was extra strong and broke down the door, but he had lost the robber. He looked left and right and went down every street, but sadly the robber was nowhere to be found. The superhero checked everywhere again to see if the robber had moved but no, he had disappeared…

Megaman and the masked Robber

“What door did he go into; this is not a situation I like.” Knowing that he was quickly losing time, Megaman took a deep breath and advanced through door number 2.

“Give me all the money!” Being threatened by a metal pipe, the cashier had no choice but to give the masked robber the stash. Giving all the money to thief, the robber replied with a sly thank you and a smirk on his face. Walking out the bank, the thief said “Just what I deserve” Emergency Alarms rang in unison as the robber exited the bank which got all the employees worried.

A cashier in the bank called Peter Mega heard a loud watch alarm go off and this triggered him to rip his shirt and trousers off. The employees watching him turned away in shock but when they turned back, they saw something unexpected.

Instead of seeing a naked man, they saw a muscular man wearing a thermal suit and a cape. He was no longer Peter Mega; he was now Megaman.

Running out of the bank, Megaman caught a glimpse of the thief and quickly advanced as he wanted to return what was rightfully theirs. Looking over his shoulder, the robber spotted the big man racing towards him. Without warning, the thief ran for his life dodging and weaving past the crowds of people in front of him. Megaman followed closely behind as he saw three identical doors, all closed, all soundless. Which one.....

You need to be a member of Write Path International Connections to add comments!